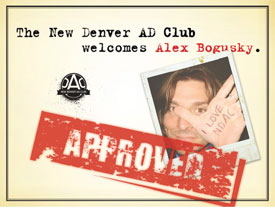 That's the question Alex Bogusky said he is constantly asking himself. "What's next?" He's always looking for the next big thing. The next cool way to bring a brand to life. If you read much about CP+B, you know that's ingrained into their culture and the way they think. It was clear in this interview that this comes from the top.

Last Thursday, Alex was on stage being interviewed by John Temple, editor & publisher of the Rocky Mountain News, about his agency, their work and a bit aboout how they go about it at the request of the New Denver Ad Club to kick off their new organization.

Since Sean already shared a lot of his notes and a lot of what I jotted down when I got home is similar, I'll not recap all of mine, but instead call out a few highlights/recurring themes and share some thoughts.

Pop Culture, Pop Culture, Pop Culture
These two words came up more than a few times throughout the session. It's very evident that pop culture not only influences the work at Crispin Porter, but that it is their mission to do as much as they can to influence it as well. This clearly works for some of their clients quite well (Burger King anyone?) and other's not so much (Miller Lite? no thanks.). In looking through their body of work, you can see that they don't always try to push the limits of pop culture, but when it feels right for one of their clients, they certainly do hit the gas pedal.

Let's Play a Little Game
A short video was presented on the Burger King XBOX games, showing how these came about from early "information leaks" to gaming enthusiasts, to developing a support cast of characters for the King by increasing their presence in TV ads, to the ultimate success of the campaign. Shortly thereafter, Alex was sharing his thoughts on where things are going and that he sees games as an area that is becoming more and more interesting for brands. And then he brought up that this is something he has been thinking a lot about lately.

He said that for the longest time, it has been about "what's your brand's story?" But now he wonders if it shouldn't now be "what's your brand's game?" I think he's right on this. A game is something you play. It creates an interaction. In a story, you're telling someone something. A story is one-way communication for the most part. But a game requires some type of interaction, thinking, reaction. A game requires you to DO something. (More to come on a future post as it's been in my head for quite some time and just keeps building and building as I read and hear more.)

He said Crispin has always been looking to play games with consumers, for ways to be interactive, even before there was "interactive." He used the example of the stolen SpongBob Squarepants inflatables, or Spongenappings as some called them, from Burger King to support this. Rather than getting mad about it or not doing anything about it, they decided to have fun with it and send out a reward for information leading to the safe return of them.

Method Branding
One thing he brought up ever so briefly was that they (CP+B) practice method branding. (Hmmm. Think this is based on method acting?) He said they will take a product home (or in the case of Burger King, eat a lot of burgers) and live with it, sleep with it, play with it, etc., until they find something really special about it. Something you can really love about it. They then come back and start creating ideas based on this. They know they're on to something good when they can look at it and it changes the way they look at the product.

I feel like I have heard this term before elsewhere, but can't quite remember where. I like the idea of looking at it this way. I think it's something that some of the best creatives have probably always done, but maybe haven't always called it such. If you're going to be asked to create an interesting  ad or idea for something, what better way to do it than this? You can have all the research in the world but I think there is something to be said for experiencing a product first hand if you can.

Creating Intellectual Property
This string of three words came up a few times as well during the course of the interview. If you visit CP+B's web site, you can see that they refer to themselves as a factory for advertising and branded creative content. Given the way they are approaching compensation on some things now though, I have to think this is how they're looking at their work and ideas for their clients moving forward and that it will impact how they are compensated.

Pick One Please
I think this came up around when he was talking about the method branding thing. He used a couple examples but the one that stuck with me was for Burger King and how they decided to be all about burgers and sandwiches. They decided to not try and chase the leader. They're happy to let McDonald's play around with salads and wrappy things. Burger King is for burger lovers. "How can it not be when your name is Burger King?"

This is something that many of us often hear and/or preach all the time to our clients - that you have to pick one thing and stand for that consistently. You can't be all things to all people. You can't say fifty different things in one ad about why your product is better. Pick one. Repeat it over and over in different ways. Make sure it's big enough to do this. And damn it, make it interesting. Don't just tell people you're this. Show them. And then ask them to show you. Play with them. Make it fun. Sorry. Got off on a tangent there...

Miscellany
Some random other notes from the evening:
- Two people he admires: P.T. Barnum, Howard Gossage
- The only two agencies he mentioned other than CP+B - Goodby and Wieden + Kennedy
- Suck up everything you can from those around you. I suck up everything I can from everyone at the agency - life is a pyramid scheme.
- Don't ask anyone to do something you wouldn't do - if I don't want to go to a client meeting because they've gotten rough to sit through, maybe it's time to do something about that
- On measurement studies - You can raise all the awareness, brand tracking metrics you want, but if it doesn't increase sales, you're going to get fired, so why measure that stuff? The only thing we look at/care about is if it's driving sales.
- On focus groups - Focus groups do to creative ideas what the wind tunnel did to the car - they take all the edges off and you're left with a bunch of cars that look like eggs. The Pontiac Aztek is a great example of a focus group car. (I don't think he was knocking focus groups as a whole on this, just when they're used by clients to judge creative ideas before they're produced and then using that info to "meddle" with the creative/idea.)
- His belief is that you either go with an idea 100% or it doesn't work. To the point that if a client is doing "fearful meddling" on something, he'll stop them and not ask them to trust them but to go with it the way they've presented it and if it doesn't work, they can fire them. His support on this was that they do their homework. When they present ideas they define the problem, show the strategy, show a bunch of stuff that supports all of that and then show the ideas that resulted and support for why they'll work. If you only go 80 or 90%, it's not going to work.

especially the idea of "what's your brand's game?". have to play around with that a bit, as it were :)

Thanks for sharing, Paul. many good points. And Bogusky will make Denver hot!