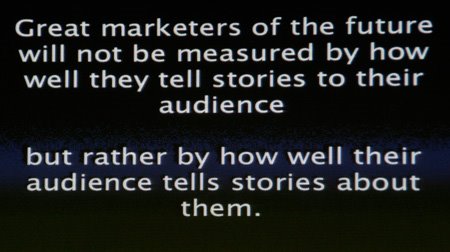 I've had this image for a while now and have been meaning to write a bit on it. It comes from a presentation given by Tim Smith at the Digitaal Willen We Allemaal 2008 Conference/Event (which loosely translates to "We All Want Digital," if Google's Dutch translation is correct). The only thing I'd change is instead of it being about the future, I'd say it's already what great advertising and marketing is doing today.

Fallon London gets this too. They not only created talk for Cadbury, but they have inspired people to create new versions of the Gorilla and Trucks spots for them, some of which became ads that aired. They have created quite a stir for Sony as well, where the last few years people have awaited the next new ad for Bravia.

One of the latest examples may be in the works from Droga5, where their Bike Hero video has not only been creating talk, but it has inspired at least one Guitar Hero fan to extend the message further...

When you sort it all out, it comes down to one thing really - foresight. You have to start with the goal of getting people to talk and/or create content in mind.

If your creative brief's "one thing" has to do with getting people to do something rather than take away something you're telling them, you're going to inspire people to talk about your brand at a minimum. And if you've got a solid foundation in place for them to build upon, you're going to inspire fans of the brand to create new content that supports your idea and pushes it even further into culture.

So, is what you're putting out into the marketplace encouraging people to tell others about your brand? Is it going further and inspiring them to create something new to support your brand even more? Or is it just creating noise people would rather tune out?

To be one of the great marketers of the future, we've got to catch up to those who already are, today.

If you don't have a strong context (i.e. as you said, one that's going to inspire people to talk about it at the very least, or perhaps provoke even more reactions) for the content you're creating, then it's all a bit of a waste of time.

I've been meeting too many people recently that are just assuming people want their content and all they have to do is put it out there is a variety of places and formats - I'm doing all I can to push back on those kind of silly conceptions, and it's always great to read inspiring posts such as this one that encourage me to keep pushing for good work to happen.

Nice post Paul ... but to be fair, there's been many companies who've been creating fate rather than creating ads ... and they've been doing it a lot longer than Google, Crispin's and Droga5 and the like, even though they are obviously lovely companies.

HHCL were pioneers in there approach to advertising and communication though it could even be argued JWT were quite pragmatic when they developed 'soap operas' to flog washing detergent ... though they obviously went bad, very quick, ha!

In my opinion, IDEO are better than almost every ad company out there - even mine which I'm very proud of the things we do - and whilst they tend to create rather than communicate, that's a damn site easier than having to do it the other way round.

i must sneak a word of cautious.

you said: You have to start with the goal of getting people to talk and/or create content in mind.

for all these great examples you provided, i can think of so many other UGC initiatives that NO ONE wants to engage with.

Due to mainly marketers looking for short cuts and thinking about UGC as a cheap tactic rather than a long term business strategy you end up with lazy boring brands expecting people to do the marketing job for them... and that's a recipe for FAIL

Charles - Thank you. Appreciate your taking time to leave a note.

Willem - Glad to hear you're pushing for what's best and right. It's the only way we'll get to where we need to be.

Rob - Thank you. And you're very correct. Lots of agencies have done this throughout time. Those were some examples that popped to mind from recent work. I find it very unfortunate that so many people in our industry don't look at the past to see what has worked. Everyone seems to like to bash the old ways but then ends up in nearly the same place with their "new way." I wish more people in advertising had more respect for those that helped us get to where we are. Anyway... Thank you for a very encouraging comment and much needed inspiration.

Asi - Good to hear from you! Thank you for bringing in the cautionary point. I agree wholeheartedly. You have to not only start with the goal of getting people to talk and/or create content in mind, but also find what's going to be meaningful to them so that they want to take part and do it the way you're hoping. Could also be called relevance or context. In other words, it's not about what you want them to do, it's about what they want to do and you giving them proper inspiration.

'Advertising that does' as defined by the slide image above is what great marketers have always done. Rob mentioned JWT's 'soap operas'. The Michelin Guide is another brilliant example to get car owners to drive around France in search for epicurean delights and consume more tires as a result.

As long as the content is relevant and inspiring, people will talk and do in response to it. I think you put your finger on it when you said that it's about foresight. And it goes without saying that this is foresight based on an astute understanding of what motivates people to act.

Interestingly enough, a lot of 'advertising that does' is still traditional media advertising (Fallon's Gorilla, Crispin's Whopper Virgins), which to me indicates that a channel such as TV will be relevant for a long time to come provided the ad industry, on a wider scale, can get its act together and make ad content that is relevant to today; content that truly connect with people.